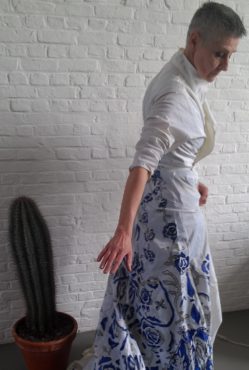 Here we see the one and only Truus Bronkhorst, one of the most interesting Dutch choreographers ever, striking a pose next to a very dangerous cactus @ Katleen Vinck’s place.

This was the beginning of a very dangerous collaboration between Jan Martens, Truus and myself back in 2013: a dance solo for Truus called SHE WAS A VISITOR. In the end we didn’t use Robert Cash’s wonderful hand-painted costume. The costume is from Hyena’s archive & Robert made this dress for another choreography of mine called DIES IRAE (1995).

There appears to be some system in the madness: right now i am working together with Jan Martens and Katleen Vinck (see: Lostmovements) on a piece of music (amongst others) called . . . Dies Irae. (picture by Katleen Vinck, who, not much later, stepped into the cactus: ouch!).