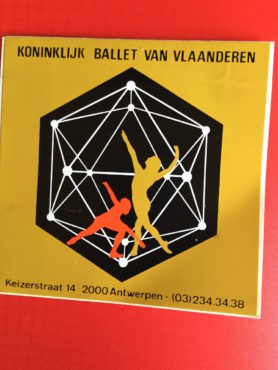 The amazing design from 1979 is by Paul Ibou. The image combines some classical movements with the icosaëder-shape, as used by Rudolf von Laban. This makes sense because Jeanne barones Brabants, the founder of the Royal Ballet of Flanders, used to dance ‘modern’ in the Lea Daan Dansgroep (1930’s) before she became ‘classical’ in the 1950’s (this is the shortest shortcut I could come up with).

Anyways I can not wait to go and see Cantus Firmus, a choreography by Jeanne Brabants from 1969, which will be recreated by Opera Ballet Vlaanderen next month. Another great idea by Sidi Larbi Cherkaoui and his team, after bringing back Martha & Pina a few seasons ago.